Dr. Marcia wrote an article for the Gerson Newsletter, outlining her journey to health, which she would like to share! 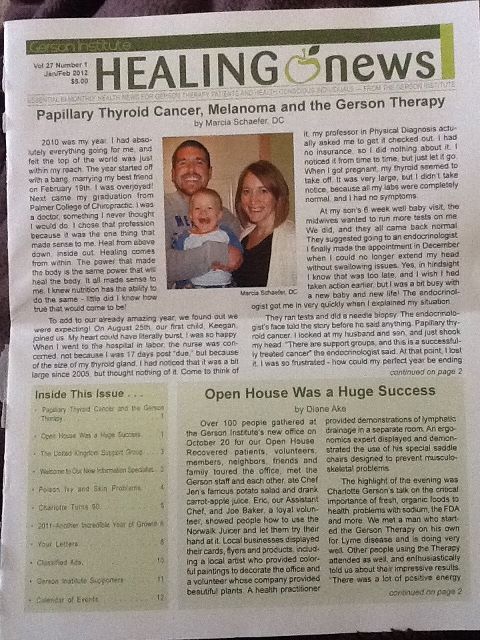 2010 was my year. I had absolutely everything going for me, and felt the top of the world was just within my reach. The year started off with a bang, marrying my best friend on February 19th. I was overjoyed! Next came graduation from Palmer College of Chiropractic. I was a Doctor, something I never thought I would do. I chose that profession because it was the one thing that made sense to me. Heal from above down, inside out. Healing comes from within. The power that made the body is the same power that will heal the body. It all made sense to me. I also know nutrition has the ability to do the same, little did I know how true that would come to be!

To add to our already amazing year, we found out we were expecting! On August 25th, our first child, Keegan, joined us. My heart could have literally burst, I was so happy. When I went to the hospital in labor, the nurse was concerned, not because I was 17 days post “due” but because of the size of my thyroid gland. I had noticed it a big large since 2005, but thought nothing of it.

Come to think of it, my professor in Physical Diagnosis actually asked me to get it checked out. I had no insurance, so I did nothing about it. I noticed it from time to time, but just let it go. When I got pregnant, my thyroid seemed to take off. It was very large, but I didn’t take notice, because all my labs were completely normal, and I had no symptoms.

At my son’s 6 week well baby visit, the midwives wanted to run more tests on me. We did, and they all came back normal. They suggested going to an endocrinologist. I finally made the appointment December  3rd when I could no longer extend my head without swallowing issues. Yes, in hindsight I know that was too late, and I wish I had taken action earlier, but I was a bit busy with a new baby and new life! The endocrinologist got me in very quickly when I explained my situation.

They ran tests and did a needle biopsy. As they prepped the slides in the room, I joked with my husband about it, knowing it would be nothing. My son, 3 months old at the time, seemed intrigued by the whole thing. After 4 needle samples, they all left the room and said they would be back with primary test results.

The endocrinologist’s face told the story before he said anything. Papillary thyroid cancer. I looked at my husband and son, and just shook my head. “There are support groups, and this is a successfully treated cancer” the endocrinologist said. At that point, I lost it. I was so frustrated – how could my perfect year be ending this way!? I had SO much on my plate, so much to live for – why was this the test I was chosen for?

In that same instant, I decided I would kick this cancer out of next year. Had it not been for my mother healing breast cancer and melanoma naturally, and my education in Chiropractic College and Nutrition, I don’t know what I had done. “Papillary Thyroid Cancer, surgery in January” I texted to my mom and sister as I left the hospital.

I went into surgery on January 3rd, 2011 determined this was the year this cancer would be found, but leave as quickly as it was found. In surgery, they did a total thyroidectomy and took 30 lymph nodes out of the left side of my neck, and 26 tested positive for cancer. My thyroid was the size of my surgeon’s fist! We were now dealing with metastatic thyroid cancer. We made a follow up appointment for a CT scan in March.

I decided to get a skin checkup, since I had been on yearly skin checks. The dermatologist said she dreaded making the phone call to me on an early morning in February to tell me I tested positive for malignant melanoma. I had surgery for that as well, and was busily researching my options. I already knew the benefits of diet, and had started juicing, but didn’t know how I would get to Mexico.

In March, I had a CT of my neck and chest. They found another enlarged lymph node and a mass in my right lung. Surgery happened again, and they took 41 lymph nodes out of the right side of my neck. It was a relief to me in a way, as the scar on my neck is now even! I worked to find humor in my situation, but the truth was, surgery was a lot more painful the second time around, and I was sick of being labeled as “sick”. Of the 41 lymph nodes taken, 4 were positive.

Thanks to some of the most giving, selfless people in the entire world, I was able to take the trip to the Gerson Clinic, and my husband, Shawn, and I left on April 19th, 2011. Words can’t describe my experience at the clinic. We were warmly welcomed when we got there, the other people regaining health were open and willing to share their diagnosis and what they had been doing up to this time. The knowledge and peace I received as a patient at the clinic will stay with me my entire life.

I fell into a routine. Tuesday and Friday I get 25 pounds of carrots, I cut  them and put them in gallon ziplock bags, so they are ready to grab and juice. I prepare vegetables for the green juice and prepare the soup vegetables. I have the Norwalk Juicer and a Citrus Juicer, a distiller, and my NuWave PIC, which I now can’t live without!  As the number of enemas I had to do decreased, I found I was able to do more things as well.

My blood work has been coming out normal and my chest xrays showed that my lungs are clear. I get regular skin checks and my skin is clear of melanoma. My endocrinologist said that I am cancer free, less than a year after my original diagnosis.

Treating cancer is a choice. We all have choices every single day of our life. Every person down in Mexico, and in San Diego gets to see the bright side of that choice. Cancer is absolutely incurable – in the medical world. Never once will poison heal, and I am a living testament of that.

2011 is my year. I have defeated cancer, I have opened my practice, and I am living proof a positive attitude, supportive, loving friends and family, and lots of carrot juice can make all the difference in your world. Cancer is ABSOLUTELY curable, and I will not stop my crusade to help others with this fantastic therapy – I will pay it forward to anyone who will listen!